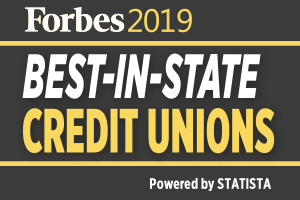 Once again, LGFCU earned high marks in Forbes’ survey of more than 25,000 credit union members and bank customers across the U.S., who were asked to rank their current and former financial institutions on criteria including trust; terms and conditions; branch services; digital services; financial advice; and overall recommendations and satisfaction. Only 3% of financial institutions in the U.S. made this list.

“We are deeply honored not just to be featured on this list, but to be recognized as the number one credit union in North Carolina for two consecutive years,” said LGFCU President Mark Caverly.

“Delivering great service and value to our members is our goal every day. And to receive this member-driven recognition shows what our members know and want to share with others: That we’re a member-owned, nonprofit cooperative working hard to earn their trust and business.”

In 2018, when Forbes worked with an outside agency to identify the best credit unions in the nation, they interviewed the very people who are most impacted by credit unions — their members.

That honor humbled us and reminded us all of the great responsibility we have to serve our members.

In 2019, history repeated itself when LGFCU was again ranked the state’s number one credit union.

For us, this accolade isn’t about bragging rights. Instead, the “Best Credit Union in State” recognition tells us that our members trust us, they appreciate the products and services we offer, and most importantly, they believe we have their best interests in mind.

Sure, we’re proud to be recognized by Forbes. But the biggest accolade of all is that our members know we’re serving them well. From all of us at LGFCU, thank you for the opportunity to serve you.

Factors most important to members

In conducting its Best-In-State Banks and Credit Unions survey, Forbes noted the importance of customer service, accessibility and financial advice in an industry that has seen massive changes since the mid-1980s, including significant growth in online services.

Learn why LGFCU members are so satisfied. Discover more of our story or find out how you can join LGFCU.